Where We Stand and Who We Stand With (I know….a “generalization”)

Collectivist authoritarian ideologies spanning the spectrum from Nazis to communists.

Laws manipulated to serve the partisan goals of the moment

Those who wish to upset societal traditions and stability.

Those who prioritize the interests of far-away abstractions (“the world,” the “community,” the “people”)

Those who are dishonest with themselves and others regarding who they are and what values they hold (fascists calling others “fascists!”)

Those unable to acknowledge their own flaws and self-interests

Rules for thee but not for me

Those who believe that equity trumps freedom.

On the other side:

Those who believe in traditional standards of lifestyle and allegiance to family, friends, and close members of the immediate community (people they can actually see and converse with)

Those who admit to preferring cultural standards and customs they are familiar with while not wishing to meddle in the choices of others.

Those who are honest with themselves and others regarding their hopes, dreams, and values (having no problem admitting that they want the best for themselves and their families)

Those who simply wish to be left alone

Those who believe that freedom trumps equity.

Those allied with the first side noted can loosely be seen as adherents to a leftist worldview (authoritarian collectivism), a value system that always produces a society in disarray, ending in a drab, cruel, and lifeless condition for those who succumb to its dictates. The latter, which can be loosely called classical liberalism or “conservatism,” inevitably produces a dynamic and prosperous society that is diverse in spirit and condition, and honors the free will and actions of others.

One side offers a road to human progress and a template for the pursuit of happiness. The other, a road to hell.

What the Antichrist Can Teach Us

(I can’t believe I’m doing this. I hate Google and swore I’d avoid their “products.”  But…it looks like people still come across this blog site so when I post an essay to Substack, I might as well put a copy here as well).

A deceptive title to be sure. I’m not really sure that there is such a thing as an “Antichrist” and if there is, he’s not likely to be much of a “teacher.” That aside, it should be noted that we can be taught plenty by symbolic charecters in mythology. Prometheus, Hermes, and maybe even the characters in the Wizard of Oz exemplify real-world behaviors and scenarios. They at least have as much validity as the dream you had last night — which, if understood, can teach one plenty regarding their hopes and motivations.

I’ve always been struck by the symbolism of “The Antichrist.” It’s not like history doesn’t occasionally present us with such a character or system.  (I’m assuming that “the Antichrist” can be a system or institution as well as an individual). With vaccine passports and all, the symbolism of having to verify one’s allegiance to a corrupt and coercive system and its edicts has certainly reached our contemporary doorstep.  I don’t know about the “ten horns” or “ten heads” or whatever the Book of Revelations tells us but in a less symbolic sense, we certainly have some potential “beasts” in our midst.

There have been mystics and soothsayers who insist that “The Antichrist” is real.  A noteworthy speculation being a character born in the middle east on February 5th 1962 in the early morning. Astrologers would certainly recognize the horoscope of such an individual as being exceptional in some way.  ‘A very rare lineup of several planets in the sign Aquarius.  Adding intrigue to the mythic mix, such an individual would now be experiencing what astrologers call a “Saturn Return” — a pivotal life transition that most people experience between the ages if 28-30 and again between 58-60.  There has probably never been a time where so much in the way of foreboding potential has emerged on the world scene. Technological advancements and AI certainly add a convincing icing to the soothsayer’s cake.

In earlier times we had Caesar, Napoleon, and Hitler as potential expressions of the archetype of total worldly authority.  Do we really want to go there?….again?

There have been a few movies and low-budget documentaries that have depicted an Antichrist figure as the obvious personification of evil. Such films do little justice to what should be a concern for less obvious and more frightening expressions of evil. Looking evil probably isn’t a tip-off as to who is evil. If there’s a devil, he’s probably well-dressed.

The reason “the Antichrist” is such a convincing villain is that what he represents is — paradoxically — beyond real. A religion-inspired image of a charismatic ideologue seeking total authority over nations and peoples. Actually, not that far-fetched.

So, what can we “learn” from the Antichrist?  First of all, we can be aware that, symbolically, such a thing exists. While he may not exist within the trappings of mysticism, religious teaching, or the battle between heaven and hell, he surely exists and has existed throughout history, in one form or another. The antichrist is about power, not the simple power one sees in a military coup, where a clique gains enough authority to fleece the public of wealth. An Antichrist would no doubt enjoy some of the plush gains achieved through plunder, but a real manifestation of worldly evil doesn’t really care that much about simple property and possessions. They truly do wish to have command over the hearts and souls of humanity.

Man has become god before, in Egypt, in Rome, and to lessor degrees in other times and places around the world. Politics by itself is a practical matter — gain power, get valuable “gifts and prizes.”   Those who want absolute power and those who are willing to bow before it are dealing with something beyond politics. Cults by nature are religious. Wanting to be god is the ultimate act of narcissism and demanding that others abide by your delusion is certainly akin to evil.

It really is amazing to think that after Hitler set massive catastrophe in motion, he instantly disappeared (killed himself). All of Europe could look at the ruin around them and say sarcastically, “what was that all about?”  It was as if a magician had transfixed the attention of everyone and then existed the stage unnoticed.

What the Antichrist of lore and speculation can teach us is that, however he may manifest, his program should be resisted at all costs. Whether the mystical manifestation of a holy religious text or a mere megalomaniac with a world vision, his path will surly always lead to hell.

Proud to be conservative

We have every right to be proud of the fact that we respect order, responsibility, hard work, and adherence to standards of decency, and societal stability.  We strive to better our condition and admire others who do so as well.  We are skeptical of those who would demand our submission to the bureau-state and its accomplices. Our prime allegiance is with our family and friends and those in our community who we can actually see and converse with.

We acknowledge the superiority of our system that has balanced and diffused political power so that the individual may live unmolested by busybodies, control freaks, and tyranny.  We respect those who choose belief systems that honor wonderment at creation and speculate a divine consciousness that sides with the good.

The only “hate” we hold is to those who would deprive us happiness and free volition.

We are right and our cause is just. We have every reason to be proud to be conservative and our time of surrender is over.

I don’t plan to devote much time to this but when inclined, I’ll write HERE occasionally. 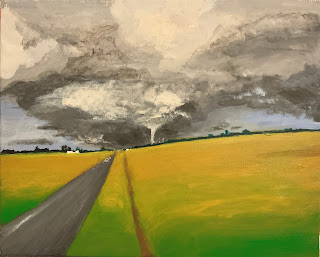 I've taken a break from this before and eventually came back to it. That may be the case again...maybe not.

I’m trying to extricate myself from life with the tech giants, for all the obvious reasons.  For now, I prefer directing my attention to other ventures. I’m fully aware of the fact that I usually haven't said anything here that can’t be found elsewhere. I just like writing and hope I’ve directed some to some critical thought regarding the events of the day.

Needless to say, we are headed for some serious trouble. It probably wouldn’t hurt to take on some mild “prepping” strategies.  At worst, your friends will call you crazy...before asking if they can barrow some toilet paper.

The American “experiment” is on the precipice. It’s been noted by many that free societies typically don’t last much longer than 240 years or so (in astrology we call that one Pluto cycle).

Decent people want to continue the amazing ride our constitution has afforded us but, there are others — many others — who never really liked the idea of a free society. Those people now dominate everything. Of course, they’ll be sorry in the end that they steered our existence off the cliff of history.

I may post something again but, if I do it will be on Wordpress or some other system free of the Googleopoly.

For now....be safe, be sane, and be aware. Knowledge, peace, and beauty.